We're delighted to share with you an article by Scottish Cycling featuring the Alba Development Road Team.

Alba's Kate Richardson finished an incredible 5th place in the team's first British Circuit race. Another great result that demonstrates the continued success of the team - competing at the highest level in their first season of road racing. 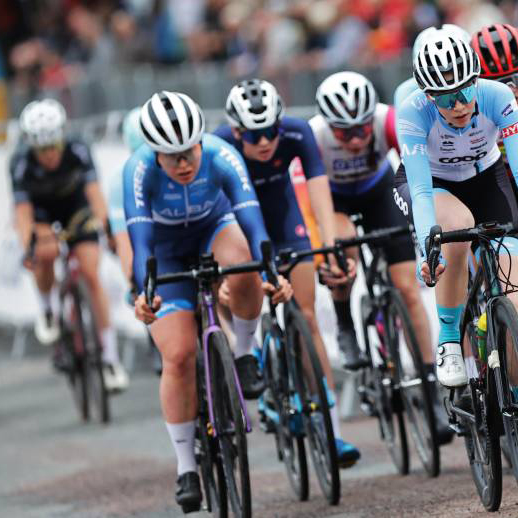 Take a look at the full story or read below:

Kate Richardson (Alba Development RT) impressed again with a great fifth place finish as the Dumfries and Galloway town of Kirkcudbright played host to an enthralling British Circuit Champs.
Many had predicted that a breakaway would be victorious in the women’s race as the heavens briefly opened approximately 90 minutes before the start of the action, to make the road surface very greasy.

With the short loop hosting off-camber bends and a dead turn in the road 200m from the finish, it was a course that was designed for stop-start racing.

After starting at the very back of the field, Richardson was able to position herself near the front of the peloton after 10 minutes, alongside fellow Scots Beth Morrow (CAMS-Basso) and Beth Harley-Jepson (Jadan Vive-le-velo).

Unfortunately for Harley-Jepson, she was held up in an accident at the off-camber penultimate corner which forced a number of riders out after about 15 minutes, as the attritional racing forced the riders off the back of the main group rather than attacks off the front.

It was clear that a bunch sprint would settle the race, with Alba RT duo of Sophie Enever and Kate Richardson in the top 15 riders.

A great sprint by Emma Jeffers (JRC-INTERFLON Race Team) seemed to have won the race, but it was Josie Nelson (Team Coop-Hitec Products) who was able to hold her off the claim victory, with the Scot Richardson finishing fifth.

On her rise through the field, the Scot was very candid:

“That’s something I learned from the Tour Series, was when you see a gap – just go for it. I knew I needed to be up there so I got myself to the front.  Thankfully that worked! I was panicking a wee bit when I started dead last!”

It was a different story in the Men’s race with a strong break of four riders – Bob Donaldson (Inspired), Matt Bostock (Wiv-SunGod), Josh Tarling (Welsh Racing Academy) and Sam Watson (FDJ) going clear early on. After Donaldson punctured, it was a battle for the win between the three of the escapees.

Matt Bostock was many people’s favourite for the win, and he did not disappoint with a great sprint, to go clear of Watson and the tiring Tarling to claim his British title.

As for the Scots, there was some great riding by the Wheelbase duo of Dave Duggan and Callum Thornley to both finish in the main bunch, along with Lee Rosie (Spokes RT). While it was bad luck for Matti Dobbins (Wheelbase CabTech-Castelli) who punctured out of contention.

Thornley claimed 16th and the accolade of top Scot, and he told Scottish Cycling:

“That was tough! I was a bit sore from yesterday’s time trial, but I got stuck in and I felt that circuit suited me. I quite like a technical circuit and the rough sectors work quite well with my mountain bike experience.”

Sunday sees the riders head to Castle Douglas as the Road Races will take place from 9am.